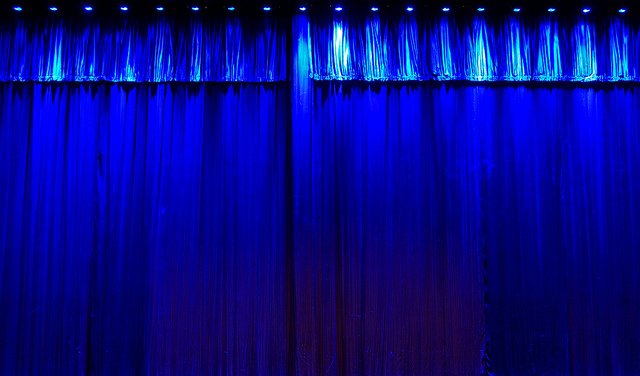 It’s potentially the lowest, saddest point in the funeral ceremony, the crux where we must truly face the inevitable and, having celebrated a life, say our final farewells.

Some call this part of the ceremony ’the goodbye’. More traditionally it’s known as The Committal. We’re acknowledging a death and committing the remains, the most obvious form of someone’s physical presence back to…the earth, to Spirit, to be with those who’ve gone before, to God…whatever makes sense for us when held up to the light of our beliefs. Or maybe it’s an acknowledgment of the mystery around life and death and our committal is to ‘we know not what’. It all depends what we believe about death. And whatever beliefs and values we hold around this juncture in our lives, there’s no avoiding facing our inevitable demise in some form.

In a crematorium, where the vast majority of funerals are held, the curtains hanging poised as they do around the coffin, symbolise so much. So, it is probably not surprising that the decision around whether to close them or not during the ceremony can be a tricky one. How do we decide?

We might see the purpose of this part of the ceremony to:

Benefits of closing the curtains.

Symbolically, when we choose to close the curtains, the person’s who’s died leaves us. The coffin disappears from view while we are still there, remaining present to mourn and gather ourselves ready to integrate the changes the death has wrought and re-enter the world to begin a new chapter without them. Often, the person who’s died is someone who’s suffered a long illness or decline in health and spent their last few months or years in a care or nursing environment away from home. In this scenario, we might find it easier to close the curtains and thus allow them to leave us this final time, rather than to ‘leave them behind’ once again, which could be too painful a reminder of the wrench of leaving them in a home, hospice or hospital.

Closing the curtains can symbolise a starker reality of the finality of the death and this can be helpful for those who are finding it troublesome to accept what’s happened. In some ways, choosing to close the curtains prompts a steeper descent in our energy, into the sadness of the occasion. Whilst that might seem challenging to some, it can also be tremendously cathartic in creating a holding space where grief is accepted and allowed to flow. In this way, it can feel like a welcome release and relief.

Benefits of leaving the curtains open.

Leaving the curtains open symbolically allows for the person who’s died to be with us a little longer. Some mourners welcome having the opportunity to touch the coffin one last time as they leave the ceremony space, to lay flowers or herbs, to say something – a final expression of love or goodbye for example – a last moment of personal, physical connection. In this way, it can feel to some as though they have more control over the end of the relationship with the person who’s died and they’d prefer to leave them rather than have the person who’s died leave first. When we choose to leave the coffin in the ceremony space while we leave it, we might see this as symbolising our allowing of the person who’s died to go. It’s like saying: ‘Ok, we accept it now that your time to go is here. Look – we’re ok to move on without you, knowing that we’ll all be ok. You’re free to go in peace and with our blessings.’

Music and ritual can be remarkably supportive. Each holds the potential to help us connect and process on a deeper level – certainly emotionally and often deeper than that. It helps to choose music with significance. It might remind us of the person who’s died, of their beliefs or ours. Reflective or meditative music can be most conducive to honouring our farewells, as can a favourite love song. Music can mark this step in the ceremony process, to set it apart from our celebration of a life, or to denote a more sombre aspect of it. Similarly, rituals can carry us across this threshold in a way that words or music alone might not. Rituals – or meaningful actions – might include the blowing out of a candle, the laying of flowers or herbs on the coffin, or the gift of them from the person who’s died to those present, so that they have a token of love and remembrance to take home. Closing the curtains is, in itself, a ritual, so when we choose to leave them open, it can feel comforting and supportive to include another ritual to mark our final farewells.

Whether we close the curtains or leave them open, it’s the meaning we attach via the structure and flow of the ceremony at this point that makes the difference. There are many creative possibilitiies when we remember to honour and include our values, beliefs and feelings in devising the ceremony.

12 Qualities to Look for in a Funeral Celebrant

Healthy Grief: How Do You Feel About Bowing to Someone Who’s Died?